This week HLS has invited a selected group of experts to reflect upon critical issues in Scottish penal policy. Today we look at the road to prison. Professor Susan McVie and Dr Ben Matthews, researchers from the Understanding Inequalities project, ask what is the relationship between Scotland’s staggeringly high use of imprisonment and poverty? (Scotland's imprisonment rate is 143 per 100,000 of national population, one of the highest imprisonment rates in Europe). But they push us further, encouraging us to carefully and critically think about how studying crime and inequality can inadvertently stigmatise the poor and marginalised.

Imprisonment and Multiple Deprivation in Scotland

In 2005, Roger Houchin foundthat the links between social exclusion and imprisonment in Scotland were so strong that the best strategy to tackle offending behaviour lay in tackling social exclusion. In 2008, the Scottish Prisons Commission agreed that the prison population was over-represented by people from the poorest communities, and recommendedsignificant changes to the use of imprisonment in Scotland. But 10 years on, what progress has been made?

The ESRC-funded Understanding Inequalities project aims to explore the causes and consequences of inequalities in Scottish society.[1]As part of our work on crime and justice inequalities, we revisited Houchin’s report to see whether the relationship between inequality and imprisonment in Scotland still held, especially given the substantial falls in crime in Scotland over the past 15 years[2].

Specifically, we wanted to see if two of Houchin’s conclusions from 2005 were still valid. Firstly, that there was a ‘linear’ or straightforward correspondence between the level of deprivation in an area and its rate of imprisonment. And second, that deprivation was ‘neither a necessary nor a sufficient’ explanation for rates of imprisonment.

We looked at data on Scottish prisoners from one night in 2014 and examined the datazones (a proxy for neighbourhoods) in which their last known address was registered. Houchin’s conclusions were based on a similar dataset, although there were some differences in methodology[3]so our results are not directly comparable with his at the neighbourhood level. Nevertheless, we can compare our findings with Houchin’s for the whole of Scotland.

Let’s consider Houchin’s two propositions in turn.  To do this, we examined inequality in the rate of imprisonment per 1,000 people in each of Scotland’s 6,976 datazones (to enable comparison across different neighbourhoods).[4] Our measure of inequality was the Scottish Index of Multiple Deprivation (SIMD), a routinely used measure of deprivation which ranks Scotland’s datazones from 1 (the most deprived neighbourhood) to 6,976 (the least deprived neighbourhood).

Proposition 1: There is a linear correspondence between level of deprivation and imprisonment. 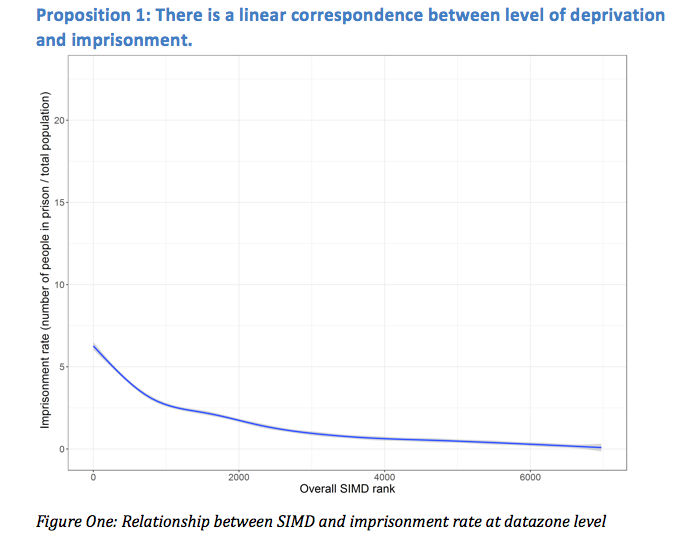 If proposition one were true, when we plotted the imprisonment rate against the overall rank of SIMD we would expect to see a downward diagonal slope (i.e. as SIMD rank increases - datazones become less deprived – the imprisonment rate correspondingly decreases).  Using the data from 2014, Figure One tests the proposition that this relationship is linear. The blue line gives a ‘best guess’ of what the imprisonment rate would be in each datazone if all we knew about that datazone was its SIMD rank. We can see that, on average, the most deprived datazones (to the left of the chart) have higher imprisonment rates than the less deprived datazones (to the right of the chart).  This is very similar to what Houchin found - as he puts it, “[i]t is not simply that the most deprived are most at risk of imprisonment, it is that, at all levels of prosperity, the probability of imprisonment increases with increasing deprivation.”

Proposition 2: Deprivation is neither a necessary nor a sufficient correlate of imprisonment 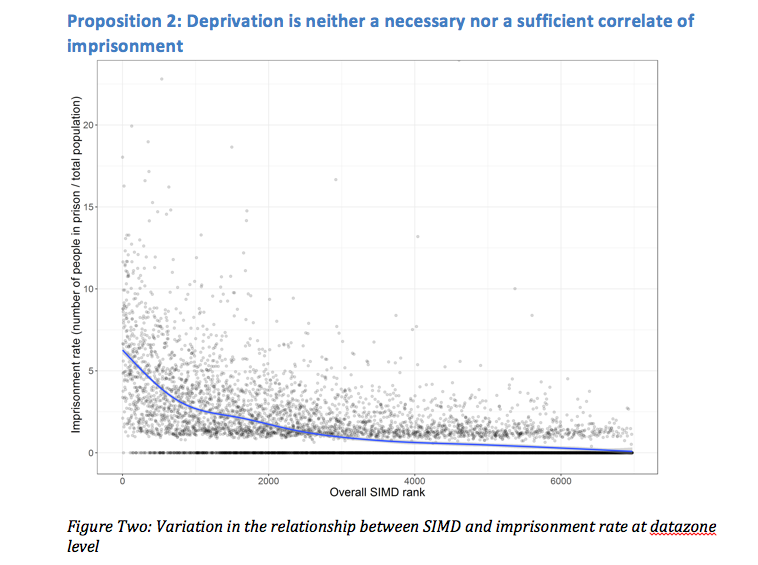 So has anything actually changed in the years since Houchin’s report?

Based on our analysis, Houchin’s conclusions about the relationship between social exclusion (or inequality) and imprisonment still provide a reasonable description of the relationship between area-level deprivation and area-level imprisonment rates in Scotland. On average there is still a ’correspondence’ between deprivation and imprisonment - and this should be a concern for those interested in prison reform and issues of inequality more broadly in Scotland – however, it is clearly not the only factor that influences whether someone ends up in prison or not.

In order to properly understand the relationship between imprisonment and inequality in Scotland today, we need to take Houchin’s propositions further and examine the extent to which multiple forms of inequality intersect to impact on people’s life chances. In her careful reflection on Houchin’s analysis, Sarah Armstrong cautioned that “killer stats”, like those from Houchin’s report, can “lock in certain ideas and associations… making it difficult to understand the problem in any other terms.” Armstrong warned that if we only focus on the correspondence between deprivation and imprisonment, when we hear the word ‘prisoner’ we will automatically visualize a ‘poor’ face - when the reality is much more complex. We also need to remember that there are very deprived neighbourhoods in Scotland where imprisonment rates are much lower than those of more affluent areas.

At a simple level, it is true that people living in Scotland’s most deprived communities are disproportionately more likely to end up in our prisons.  But, as we have shown here, visualizing the data in more detail enables us to see that there is a much bigger, more complex, story to be told. It is this that the Understanding Inequalities project aims to do in the coming years.

[1]The Understanding Inequalities project has been funded by the ESRC (Grant Reference ES/P009301/1) for three years from October 2017.  It involves an international team of researchers led by the University of Edinburgh.

[2]The Applied Quantitative Methods Network analysed different aspects of the crime drop in Scotland, including trends in victimization, the spatial distribution, and patterns of convictions.

[3]There’s a helpful, if rather technical, discussion of these methodological challenges on Wikipedia.

[5]Statistically-minded readers will have noted that whether fitted values from a statistical model are linear or non-linear will depend on the model specification used. We compared the statistical fit of a model which allowed the relationship between imprisonment rate and Overall SIMD to be non-linear to a model which only allowed a linear relationship, and found that the non-linear model did a better job of describing the data.